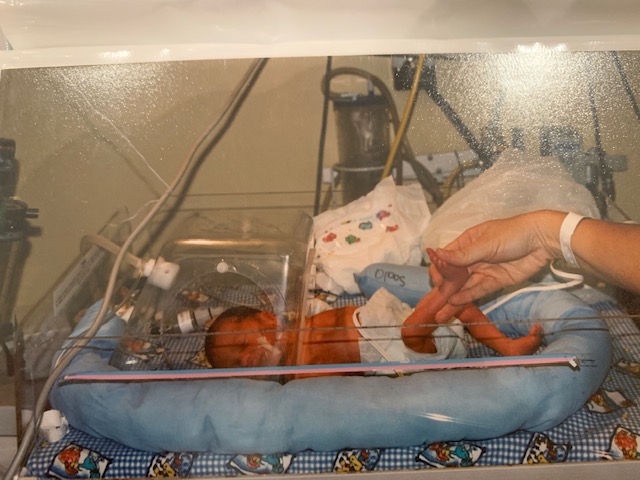 November is World Prematurity Month. To honour and support the moms of preemies, we are sharing stories of moms who’ve been there and who can offer support from the other side of a long road. This is Gail’s story.

Tell us about the day your baby was born.

My son, Joshua, was born at 30 weeks, weighing 1.365kg on Wednesday the 20th February 2002. My water broke during the early hours on Sunday the 16th. I was taken into hospital, given doses of cortisone and we were both closely monitored. On the morning he was born, the doctor said his heart was showing signs of stress & he needed to be delivered. My husband, Stephen, was not permitted into the theater with me. I was given a spinal block which didn’t work & eventually I was put to sleep and an emergency C-section was done. Apparently, it took about 7 minutes to get him to breathe on his own. When I woke up, Stephen mentioned that the doctors were considering sending him to another hospital as their antenatal unit was superior. This never transpired.

Can you describe some of the emotions you experienced during the early days and weeks with your baby?

Having had 2 children as a much younger mom, probably helped me to stay calm and I can honestly say, I never panicked or stressed. I just knew that everything was going to be OK. He was fed via a tube for the first couple of days and thereafter the paediatrician suggested we give breastfeeding a go, despite the fact that his sucking reflex might not have developed fully. Imagine the joy and elation, when he immediately started sucking. I still remember the doctor standing cheering us both on. Both of us with tears streaming down our cheeks! Although we were told that Josh could not go home until he weighed at least 1,8kg, after 17 days he only weighed 1,5kg. I begged and begged and was permitted to take him home on day 18. I had a 12 year old daughter and 16 year old son at home and they embraced their little brother from the minute we arrived home.

Do you have any words of encouragement for a mom who is currently waiting for her baby to come home?

My ‘words of wisdom’ would be to remain calm, as your baby can sense your emotions. Babies are tougher than we think and will surprise you over and over again. My son is 17 years old now. He’s big, bold, brave & an absolute gentle giant. He has such a beautiful way with small children. There were some health issues in the beginning, but I truly believe that our calm demeanor and positive attitude, went a long way to a relatively stress free and normal childhood.